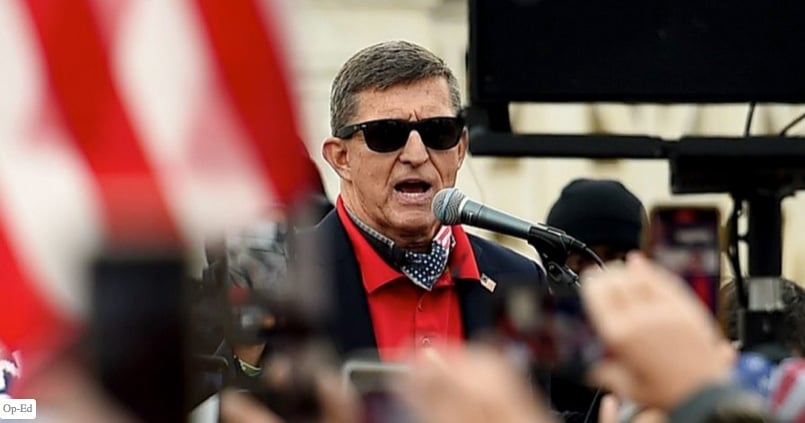 On Sept. 17, 2021, our nation will celebrate the 234th anniversary of our beloved U.S. Constitution.

The fact that this document has lasted for such a period is a remarkable feat. Legal scholars have reviewed national constitutions that have been adopted since 1789 and concluded that they lasted an average of only 17 years.

But as I travel the country, Americans are asking me, “How much longer do we have before our constitutional protections are wiped away? How long before our nation descends into a real tyranny?” One friend went as far as saying, “If you criticize this administration, they call it hate speech; if you disagree with their actions, they call you a domestic terrorist.”

To be frank, I was stunned and found myself asking, have we, the United States of America, sunk to a new low? Although we are approaching the 20th anniversary of the 9/11 attacks against our nation, this terrorism alert does not say one word about Muslim extremism being a threat and it barely mentions al-Qaida.

Rather, this terrorism bulletin focuses on the Bidens’ political opponents. Its sweeping rhetoric was so broad that it could put under suspicion more than half of all Americans. Is the Biden administration redefining domestic terrorism? Will having a pro-American set of beliefs and using the word “patriot” get you labeled a domestic terrorist?

The alert focuses on those who resist the Anthony Fauci COVID-19 narrative, stating that “threats are also exacerbated by impacts of the ongoing global pandemic, including grievances over public health safety measures and perceived government restrictions.” I wonder what “perceived” government restrictions they had in mind — aren’t the real restrictions damaging enough?

The alert also warns that “extremists may seek to exploit the emergence of COVID-19 variants by viewing the potential re-establishment of public health restrictions across the United States as a rationale to conduct attacks.” And it warns against “conspiracy theories concerning the origins of COVID-19 and effectiveness of vaccines.”

The alert also warns that domestic violent extremists are motivated by “perceived election fraud.” Therefore, if you believe that the nation overwhelmingly elected Donald J. Trump as president of the United States in November 2020, as I do, you could be a terrorist.

Then finally the nation is warned, “Law enforcement have expressed concerns that the broader sharing of false narratives and conspiracy theories will gain traction in mainstream environments.”

So, if you believe whatever narrative is being spun from the White House podium by Jen Psaki, you are automatically protected. If your tweets are never blocked, and your Facebook posts are never removed, you are a loyal American. But if you think the government is often lying and manipulating, you could be a terrorist.

The alert then promises that the government will tell us everything we need to know — by “advancing authoritative sources of information to debunk and, when possible, preempt false narratives and intentional disinformation, and providing educational materials to promote resilience to the risks associated with interacting with and spreading disinformation, conspiracy theories and false narratives.

The last provision of the alert is so reassuring — that DHS would take action against Americans “while protecting the privacy, civil rights, and civil liberties of all persons.”

I’m sorry, but DHS leadership must take us all for complete idiots. The real threat appears to be from our own government and their misperceptions of what are very real and dangerous homeland threats we do truly face.

This alert reads like something out of the 1930s. You’re a potential terrorist if you oppose lies coming from the most leftist administration ever to occupy the White House. There is not a word about antifa, or Black Lives Matter, or any of the leftist groups protected by the Biden White House while they conducted their reign of terror on American cities.

The alert had not one word about the study from Princeton University that violent BLM demonstrations (i.e., riots) occurred somewhere just under 220 locations all across the nation. These are the violent people who Kamala Harris worked to get out on bail through a nonprofit group. What a disgrace.

What can and should we learn from this alert? Much, I think. We can anticipate the next steps by the Biden-Harris administration in suppressing legitimate, constitutionally protected dissent.

This alert foreshadows more lockdowns — probably nationally. The government may be hoping to provoke the American people to actively resist illegal lockdowns, and then to characterize that resistance to tyranny as a clear and present danger — a threat to the very existence of government.

But even if there is no strong push back to new sanctions, this administration is not above ensuring that there are incidents that it can use to justify grabbing even more power.

This would not be the first administration that used a “false flag” event to gain power.

Every American should know what “false flags” are, and when acts of violence are blamed on American patriots to gain new government powers, especially with this gang in charge of the government and the FBI, this should be the first explanation we look at. Consider the role of the FBI in the claimed effort to kidnap Michigan Gov. Gretchen Whitmer.

I had no illusions about who the Democrats put on their national ticket in 2020, but the Biden administration is proving itself to be so much worse than even I thought. We have survived ineffective presidents in U.S. history. This administration is acting recklessly — dangerously — both at home and abroad. And it is acting against our own people.

DHS claims there are calls for violence against officials, law enforcement, government and religious buildings and people with opposing ideological views — but the bulletin casually admits it has no specific information about any of these threats of violence.

If you wonder about the timing, this bulletin came out the day after Mike Lindell’s cyber symposium in South Dakota ended. Such are the strategies of the rulers we’re now living under. God help us.